Dirt bikes start to be really fun once a kid is 10 years old.  It’s a great time to get them ripping up the dirt on a bike.  However, sizing a dirt bike correctly for a 10-year-old can be tricky.  You don’t want to get them something too powerful and heavy for safety reasons, but you also want to give them something they can ride for several years.  This post will hopefully help.

For a 10-year-old, the dirt bikes that I recommend for an average kid just wanting to have fun and not race seriously is either the Honda CRF110F, the Yamaha TT-R110E, or the Kawasaki KLX110.  These three models are a good size for a 10-year-old and are priced reasonably.  These are great options for most riders, but if your kid is into racing or serious motocross, you may want to choose something with a manual clutch instead.  As you look at the available dirt bikes, try to find something with a seat height of around 27″ and not more powerful than 150cc.

If you’re not 100% set on a dirt bike but would consider a youth UTV (ATV with roll cage), you should definitely check out the Polaris Ranger 150.  It’s a two-seater, costs not much more than a dirt bike, is far safer in my opinion since it has a roll cage and seat belts, it can hold TWO kids!  After I bought the side-by-side, my kids don’t get on the dirt bikes as much anymore.  On their Ranger they can just chuck on a helmet and go.  On the dirt bike they have to put on their dirt bike clothes, ALLLLL the pads, boots, etc.

In the rest of this article I’ll give more info on seat height, cost, and more info on the top 3 models I recommended above.

Here are the seat heights I generally recommend for kids:

Other than seat height, the next most important choice is whether you’d like to get a bike that has a clutch, or one that is automatic.  Most 10-year-olds are capable of learning to ride a bike with a clutch, but if this is their first dirt bike, I recommend you aim for something automatic.  Kids will be nervous when learning and they don’t need the added complexity of a clutch.

All three of the models of dirt bikes I’m recommending in this article are automatic.  When they move up to the next size of bike (125 or 150cc bikes), they’ll surely need to learn how to ride a bike with a clutch, but for now I think it’s best to keep things simple with an automatic clutch unless your kid is a very good rider already.

My son is 8 years old and while he’s a very good rider for his age, I still think he’d have more fun on an automatic when he’s 10 years old.

I like the CRF110 because it has both electric start and a kick start, it idles really well and almost always starts the very first try, and it has been really durable for us.

In terms of power, the bike is very capable.  Last weekend my son flew up an extremely steep 25′ hill of gravel without skipping a beat.  On the flat trails out in the Idaho mountains, he’ll often fly by me when I don’t dare go any faster.  The CRF110 is no slouch in the power department.  In fact, my son rarely goes into 3rd gear because he feels like it’s too fast.  We usually put him in second gear and he only switches into third on long flat dirt roads.  There is also a throttle stop if you want to make sure they don’t get going dangerously fast. 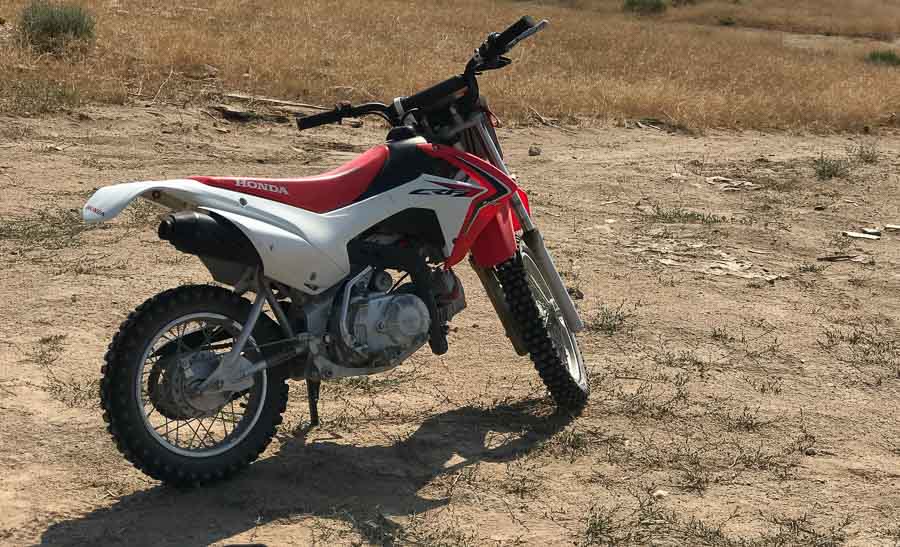 The Yamaha TTR-110 has a seat height of 26.4″ and has a respectable ground clearance of 7.1″, which is nice for getting over rocks or up steep hills.

The wet weight (full of fluids) of this bike is 159 pounds.

The biggest limitation to the Yamaha compared to the other bikes listed here is that it only comes with a 90-day warranty.  The Kawasaki and Honda both come with a 6-month warranty.

The KLX110 is popular with the kids because they seem to really like the lime green coloring of the Kawis.

Choosing Between These Three Models

Pick your poison.  These three bikes are so very close in terms of quality, features, and price that you can’t go wrong.  For me, I’d be less likely to choose between the tiny differences between the bikes.  The differentiator in my search would be which one I could find slightly used in my local market so I could save some money on the purchase.

If I were forced to choose between these three bikes, I’d probably pick the Honda CRF110.  It’s $50 cheaper than the Yamaha and Kawasaki.  It has a .1 gallon larger gas tank.  It weighs between 4-8 pounds lighter, and it has a kick starter.  Those factors would probably make me pick the Honda as my top choice, but again, the difference between these bikes is very small. 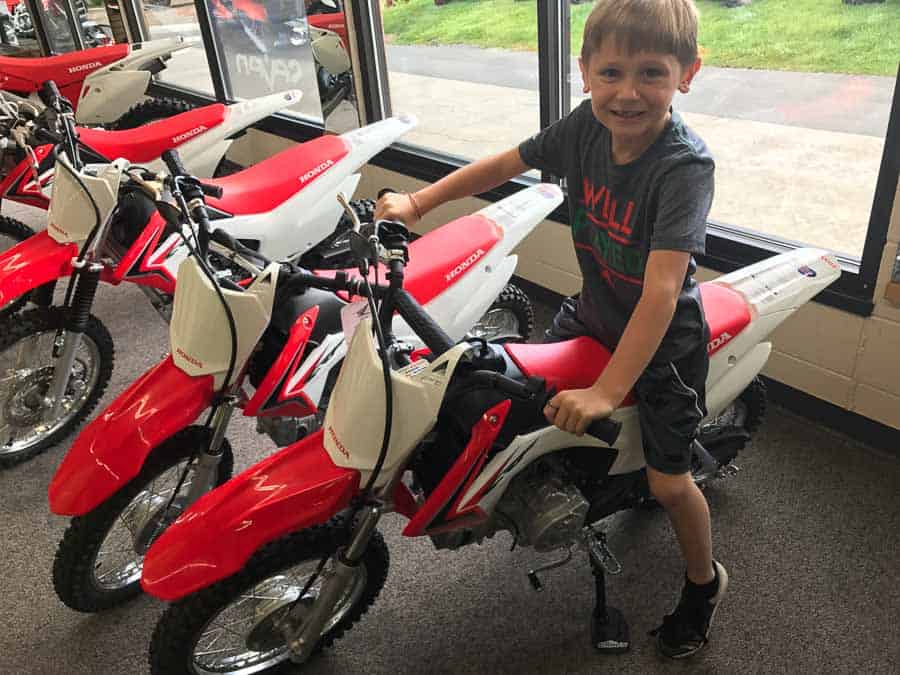 There Are Other Great Options Available

Obviously, there are many more bikes that you should consider for your kid.  KTM makes some especially impressive bikes for kids around 10 years old.  The problem with the kids KTM models are that they are simply way overpriced compared to the competition.

Aside from buying the bike, you’ll also need to purchase safety gear for your kids.  The first couple times I bought gear for my kids, I spent $500 per kid to keep them safe with good gear.

Since then, I’ve learned of some great products to dramatically reduce that cost.  Be sure to check out my recommended dirt bike safety gear for kids page to see my very favorite cost-cutting options for equipping the kids.