Today’s 4 stroke dirt bike engines are leap years better than they were 10 years ago. What has changed? Technological advancements have seen the weight decrease, the power increase and the all round performance of the 4 stroke engine become so much more efficient. 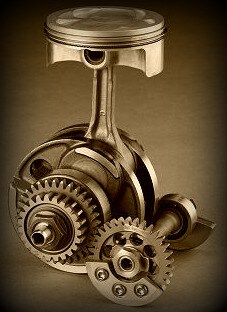 The downside of this is today’s high performance thumpers are far more costly to maintain than they used to be. Though they generally don’t require as much regular maintenance as a two stroke – but when they do there are more parts to replace, therefore costing you more.

The 4 stroke dirt bike engine consists of a piston and barrel, and the cylinder block which holds the valve train. The number of valves vary with different bikes – The ’08 YZ450F has 5, while the ’07 CRF450 has 4.

Just like the 2 stroke, the piston moves up and down in the cylinder block powered by explosions from combusting fuel/air mixtures triggered by the spark plug.

But, unlike the 2 stroke, the thumper engine only gets one ignition, or explosion for every four strokes of the piston.

The four stroke engine has four unique strokes or movements that each perform a specific task.

This whole process then repeats… 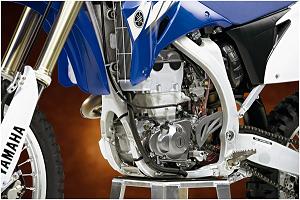 The powerful YZ450F The 4 stroke dirt bike engine, unlike a 2 stroke does not have fuel inside the crank case. Therefore, you are able to fill the crankcase (where the crankshaft bearings and moving parts of the piston rod are) with a heavy duty oil to lubricate them.

So, that is why you do not need to mix oil into the fuel with a four stroke engine. No burning oil – less damage to the environment.