Honda dirt bikes started with humble beginnings and goes way back to 1948 when the Honda Motor Co. was officially founded. This came about when Soichiro Honda, a mechanic by trade, created the company to provide a solution to Japans war-torn market. They were short on money and fuel (ha! I know the feeling!) but desperately needed a cheap and efficient method of transportation.

The early days of Honda Motor Co. saw them fitting small engines to bicycles, much like Suzuki. The first ‘complete’ motorcycle that Honda produced was the 1949 Dream D-Type – A 98cc road bike that paved the way to a large variety of popular scooters.

By 1959 Mr. Honda had accumulated a list of international motorcycle races that he had personally raced in. Here was a man who not only knew how to create a fine two-wheeled horse, but was also passionate about riding them too!

1959 also saw Honda stretch its wings into the United States. A small shop was opened in Los Angeles – not that anyone wanted to set foot in it. The Americans were more than happy with their Harley’s, Triumph’s and other British bikes and showed no interest in little ol’ Honda bikes. A massive advertising campaign with the slogan ‘You meet the nicest people on a Honda’ changed all that and the early 60’s greeted the American Honda with great success.

People began using the smaller Honda bikes on trails and campgrounds which kick-started dirt bike riding as we know it today. A popular range of Honda dirt bikes began appearing in the late 60’s… and people loved ’em!

created a frenzy by releasing a weapon of a motocross bike that had everyone diving into their pockets to buy one. The CR250 Elsinore was like no other around. Honda was leading the way…

From there Honda Motor Co. continued to pump out a hugely successful range of Honda
dirt bikes including the XR’s and CR’s, with the CR’s becoming somewhat of a collectors item these days after the CRF’s thundered onto the scene.

If you are interested in their full range of bikes then check out Powersports.Honda.com

Honda have always been a strong contender in the competitive off-road dirt bike world, favoring the four stroke engine. They reluctantly released their two stroke CR250’s in the early 70’s to keep up with progression despite Mr Honda making it very clear his aversion to them. The two stroke CR range was a dominant motocross (and later on supercross) winner from 1972 to 2007 boasting more dirt bike championships than any other motorcycle. 2007 was the last year the mighty CR’s were produced now that Honda’s sights were firmly set on the up and coming CRF four strokes again.

The first CRF’s were launched in 2000 and were hogging all the attention of Honda’s finest engineers and $$, so when they eventually snatched the limelight from the unsuspecting and all-time MX champions – much to the dismay of many-a-hardcore Honda CR fan – the reign of these light, snappy and nimble beasts had abruptly come to an end.. 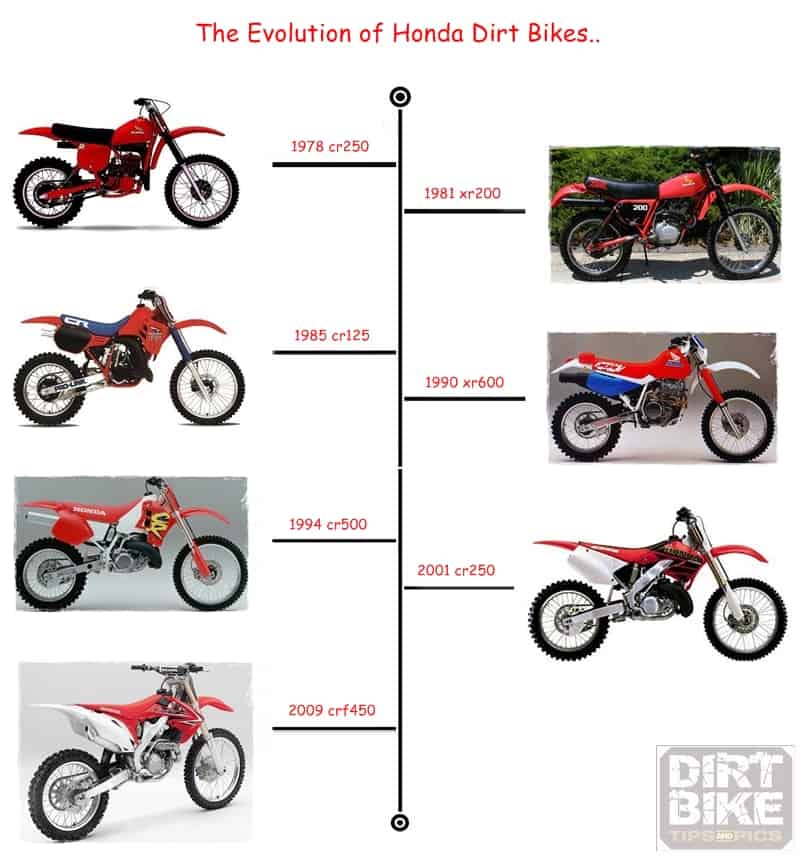 What Do You Think About Honda Dirt Bikes?

Have you ever owned a Honda? Maybe a vintage Honda? Tell us what you think of the four stroke range. Do you wish Honda still made two strokes? Do you know of any design faults or problems with particular models? Maybe you have a mechanical tip to share…

You can also use this forum to ask a Honda related question. Someone in the know may be able to help you.