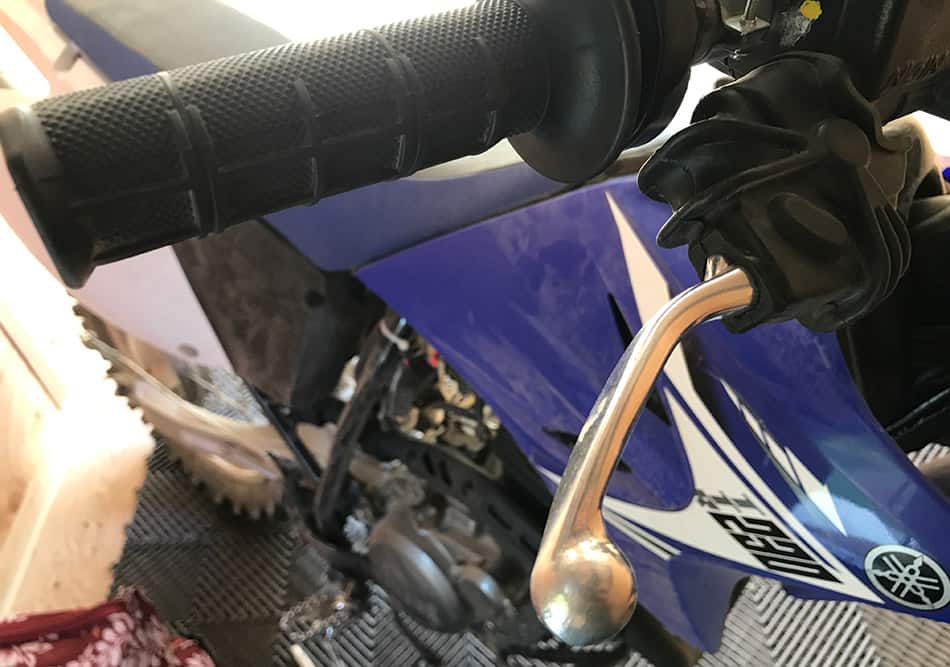 Most adults people who learn to ride a dirt bike have, at some point, driven a manual-transmission car.  Consequently, they shift on a dirt bike the same way you’d shift on a car; however, a dirt bike clutch is not similar to a car’s clutch, so you can shift differently.

Unlike a car, a dirt bike’s inner workings are bathed in a pool of oil and are multi-plated. It is not as critical to have the clutch in every time you shift.  In fact, there are some riders who NEVER use the clutch to shift up or down.  They simply kick the shift lever up or down.  I do not, at all, recommend riding this way, but hopefully, that will help you see how differently a dirt bike clutch works.  If you did that on a car, it’d tear it up immediately.

Do You Need the Clutch?

You do not need to use the clutch, at all, to down shift on a dirt bike.  It’s perfectly okay to simply push down the shift lever when you want to shift down without pulling in the clutch lever at all.

When you shift up, however, you should use the clutch.  It wouldn’t be wise to always upshift without the clutch on a dirt bike.

Why Don’t You Need the Clutch to Down Shift?

When you up-shift on a dirt bike, the transmission has torque and momentum on the gears because of the power of the engine.  This should properly be removed before shifting so as to not wear the gears, but even this is only slight wear.

However, when you are downshifting, you usually don’t have much or any throttle on (otherwise you wouldn’t need to down shift).  Because the throttle is not revved up too high, there is little to no torque on the gears and so shifting can be done without the aid of the clutch.

There are definitely some people who think that the clutch is necessary for down shifting, but as one rider recently told me, he’s been riding dirt bikes for over 30 years and riding them hard.  He’s never once used the clutch for gear shifting up or down and he’s never once had transmission or clutch issues.  That’s good enough evidence for me.

Not Everyone Agrees the Clutch Isn’t Needed for Downshifting

This is a topic of debate amongst dirt bike enthusiasts.   Some people feel that the clutch should be used for every shift–up or down.  I disagree with this thinking.

Some argue that compression braking shows some proof for the fact that there is force placed on the drive train during deceleration and downshifting.