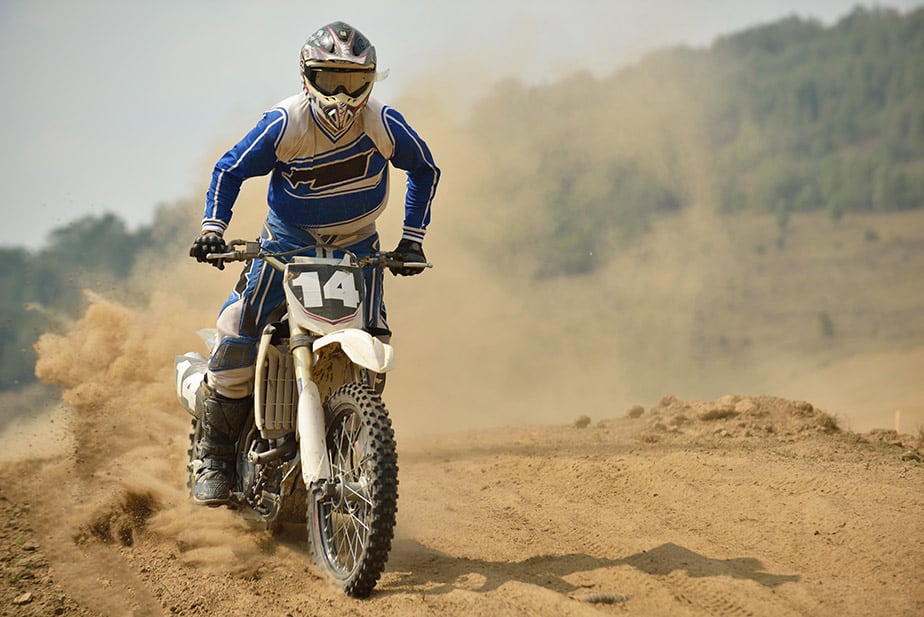 When I first got a dirt bike, it was frustrating to try and find neutral.  I kept accidentally going into first or second gear and the bike would die when I came to a stop, or I’d start it in gear accidentally.

Neutral on a dirt bike is half-way between first and second gear. To find it, kick down the gear shift multiple times until you’re sure you’re in the bottom gear.  That is first gear.  Now, lift just slightly to put it into neutral.  If you feel a significant click, you’ve gone too far and put it into second gear.

However, as a beginning dirt bike rider, you may find that you don’t need to use neutral at all.  That’s a trick I’ll share later in the post.

The Trick to Finding Neutral on Dirt Bikes

As mentioned previously, neutral is between first and second.  Here’s the trick for finding neutral.  Go into first gear by stomping all the way down, and then just nudge the shift lever upward with your foot.  Do it so slightly that it doesn’t feel like you changed anything.  Almost every beginner is nudging the lever too much and going into second.  The trick is to nudge it less than you think you need to.

That probably did it.  You should be in neutral.

If you felt a full click, or your shift lever travels up several inches, then you’ll be in second gear.  99% of the time, if you miss neutral, it’s because you kicked up too far and went into second gear.  The trick is to shift up less than you think you need to.  Just nudge it.

If you hear a significant audible click when you move the shift lever, you’ve gone too far and you’re in second gear.

You may also check to see if your dirt bike has a neutral indicator light.  Most don’t, but if yours does, you’re in business.

The gears on a manual dirt bike are almost always:

The only exceptions to this order of gears are:

Why Isn’t Neutral the Bottom Gear?

At first, it seemed SO counter-intuitive to have neutral gear between one and two on a dirt bike.  While it still seems a little annoying, there are actually good reasons for this.

Most of the reasons for having neutral between first and second come from the road motorcycle world.

Start your bike by stomping down repeatedly into first gear.  Don’t even worry about finding neutral.  Now pull in the clutch and press your start button, or kick start the bike.

Now let out the clutch slowly as you slightly rev up the gas and you’ll roll forward and start moving.  Now keep your throttle hand in the same position without moving it, and pull in the clutch and click up the gear shifter and let go of the clutch.  You’re in second gear.

You do not need the clutch to shift down gears.  When you are ready to come to a stop, pull in the clutch again and brake.  Hold the clutch while sitting still on the bike.

See?  You actually don’t need the clutch at all to ride a dirt bike.

Eventually, you’ll still need to learn where neutral is.  The time where you’ll need it the most is not when you’re riding, but when you’re starting up your bike and want to leave it idling for a minute to warm up and be ready for you.  If you use the neutral trick for this situation, you’d have to stand there holding the clutch for 3 minutes or so.  However, this trick will at least get you riding.

I teach how to ride a dirt bike with a clutch in this Youtube video:

Gear Order on Motorcycles and Dirt Bikes Is Not Codified

On numerous online forums, I read people saying that there is an obscure old law in the United States saying that dirt bikes have to have neutral between first and second gear.  That’s actually not true at all.  Title 49 only says:

There are several comments that mention the gear order, but these are not at all binding law.  They merely comment on how this is normally done.  The NHTSA publishes recommendations for safety and there certainly are laws on motorcycle controls, but as shown above, it doesn’t actually say that neutral has to be between first and second.

A Note to Dirt Bike Manufacturers

Every single person who rides a dirt bike for the first time struggles with finding neutral on the bike.  If you would like to make the sport (and your products) more accessible to the masses, a gear indicator would be a really nice feature to have.

Unlike on a manual transmission truck or car where the gear shifter goes into a different physical position when the vehicle is in a different gear, the dirt bike gear shifter is in the same spot no matter what gear you’re in.

This confusion could be cleared up, and you could differentiate your products by simply adding a gear indicator.  OH, and could someone PLEASE put a gas gauge on dirt bikes?  When a new dirt bike costs $7,000, it’d be nice to have some of these common-sense add-ons.