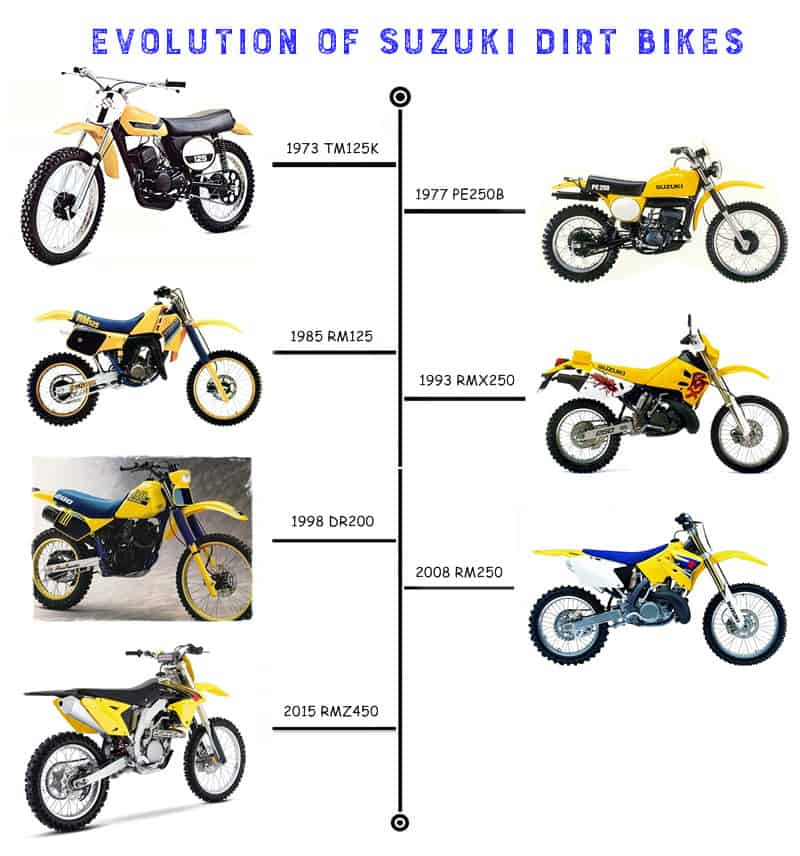 We are all familiar with the outstanding range of Suzuki dirt bikes that the Suzuki Motor Corporation produce these days. But, did you know they also produce ATV’s, boat engines, light trucks, wheelchairs and a whole stack of other small engine powered products?

Here’s the story of how your modern day Suzuki motocrossers came about… Way back in 1909, an ambitious man named Mr Michio Suzuki had established a thriving business called the Suzuki Loom Company, based in Japan. Suzuki was building weaving looms to supply Japans then booming silk industry.

For thirty years, weaving looms were Suzuki’s only focus. But you see, Michio was a smart man, he realized they needed to diversify. With the demand for civilian transport on the increase, he began designing several prototype motorcars. But, as fate would have it… World War Two kicked into gear and his great plans turned to custard when the Japanese government decided that civilian cars were not a priority.

So what’s a man to do? Mr Suzuki and co. went back to producing looms. Things were looking up again… until the s#!% hit the fan when the cotton market collapsed in 1951. Suzuki now recognized the need for affordable, nimble transport to cater for the masses of Japanese in busy, congested cities. So they began focusing on the motorcycle industry…

In 1952, the ‘Power Free’ was born. What a weapon! It was fundamentally a bicycle powered by a 36cc two stroke engine – certainly no motocrosser…

By 1954, Suzuki was mass-producing motorbikes and had changed its name to Suzuki Motor Co Ltd. This led them to begin producing cars again, this time achieving great success.

From there on as the market demand, peoples needs and wants, and discretionary income changed, motorbikes developed into lifestyle choices. Rather than just providing a transport tool, companies like Suzuki began creating ‘leisure machines’ such as the range of Suzuki dirt bikes and road cruisers as we know them today.

Tell us what YOU think about Suzuki bikes at the bottom of this page.

To view the full range of Zooks check out www.suzukicycles.com

What Is Suzuki Producing Now?

Suzuki has always been a force to reckon with in the motocross world however not so much in the enduro scene. They are known for their excellent handling capabilities and have won many modern MX shootouts because of this. Their engines have typically been ‘middle of the road’ strong – not as powerful as some of their rivals – and they’ve unfortunately had problems in the past with reliability and fast wearing engine parts. Despite all this, they still remain a popular choice for many riders.

Like the other Japanese bike manufacturers, Suzuki has put their adult sized two stroke motocross bikes to rest and now only focus on improving their RMZ range.

What Do You Think About Suzuki Dirt Bikes?

Have you ever owned a Suzuki? Maybe a vintage Suzuki? Tell us what you think of the four stroke range. Do you know of any design faults or problems with particular models? Maybe you have a mechanical tip to share…

You can also use this forum to ask a Suzuki related question. Someone in the know may be able to help you.