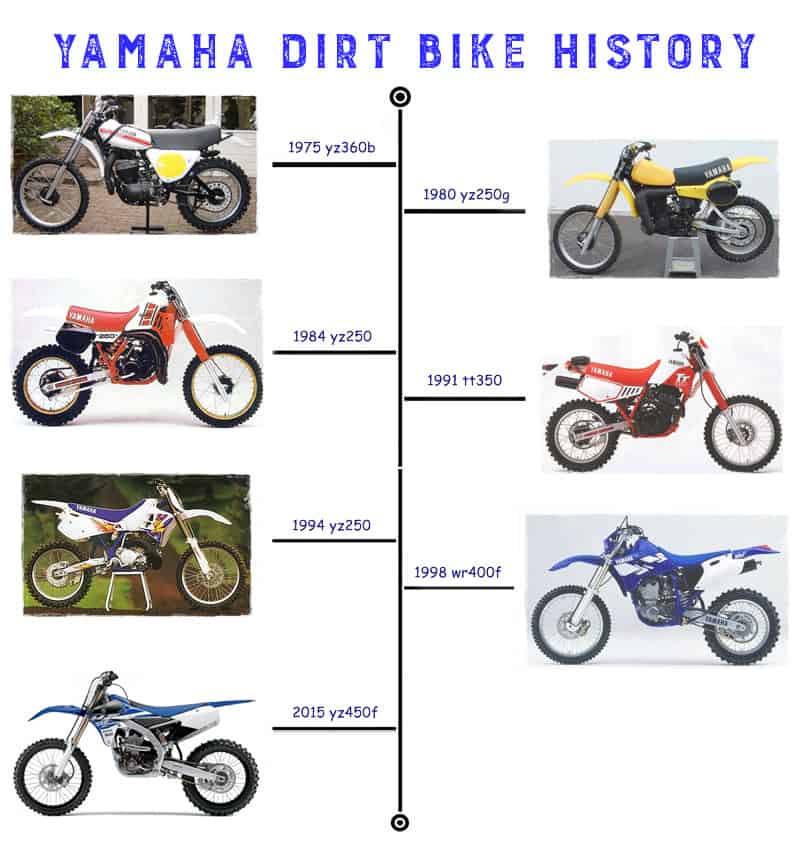 The history of Yamaha dirt bikes began way back before your old man was just a twinkle in his ol’ man’s eye. The Yamaha Corporation was founded in 1887 by Torakusu Yamaha. They originally built pianos, then over the years branched out into a wide range of products including all types of electronics, musical instruments, computer products, home appliances and even robotics. To this day you can still recognize Yamaha’s strong musical roots by its logo which consists of 3 interlocking tuning forks.

It was Genichi Kawakami, the current CEO of the Yamaha Corporation, who made the decision to utilize the companies engineering skills and expand into motorized devices.

By August 1954 the Yamaha YA-1 was complete. It was a two-stroke 125cc road bike. July 1955 Yamaha Motor Co L.t.d was founded. It now had its very own dedicated factory called the Hamakita Factory of Nippon Gakki. But it wasn’t until 1968 that the first Yamaha dirt bike was produced. The DT-1 was a two-stroke 250cc Enduro bike and was claimed to be the worlds first true off-road motorcycle. It was an exciting and hugely successful bike… and the USA couldn’t get enough of ’em!

In 1996 the AMA changed the rules of racing to allow larger 450cc four strokes to compete against the dominating 250cc two’s. This encouraged Yamaha to give birth to the YZ400F in 1997 on which Doug Henry won an AMA Supercross event (for the first time ever) in Las Vegas. This was a huge deal and a game changer, Yamaha was leading the way as the first company to create the new breed of four-stroke motocrossers as we know them today.

Yamaha has continued with their vision and commitment to excellence by being a leader in the motorcycle industry and consistently producing winning bikes. And as you can see, the Yamaha dirt bikes of today have changed somewhat since the Flintstones-styled DT-1!

For the complete range of Yammy bikes check out www.yamaha-motor.com

Yamaha was always one of the top 4 dirt bike motocross bike manufacturers for the US, Canada, Australia and here in New Zealand – however, their two stroke MX bikes had a wider powerband and seemed to lack in power and snap when compared to the others. Despite this, they still picked up a number of MX and SX titles along the way until the YZF four stroke bikes began their gradual takeover beginning 1998 onward.

Yamaha is the only Japanese company out of the ‘Big 4’ that have continued with their beloved 125cc & 250cc two strokes, much to the delight of a large percentage of riders around the world. Although they haven’t received much more than a change of stickers since 2008 (and forks in 2015), they still put up a good fight when raced against the high-tech fours.

What Do You Think About Yamaha Dirt Bikes?

Have you ever owned a Yamaha? Maybe a vintage Yamaha? Tell us what you think of the four stroke range. Do you know of any design faults or problems with particular models? Maybe you have a mechanical tip to share…

You can also use this forum to ask a Yamaha related question. Someone in the know may be able to help you.